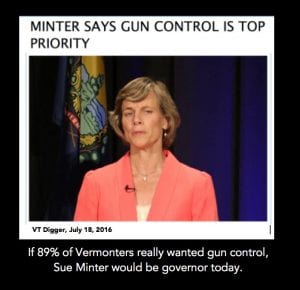 Why Vermonters need to Back Phil Scott
on Nov 8th

The Valley News just posted their endorsement of the rabidly anti-rights candidate for governor, Sue Minter.

Some quotes from the VT Digger article (because you are not allowed to voice your opinions on the VN site) are below.

VN: “The candidates differ sharply on gun control. Scott sees no need for change in Vermont’s lax laws, while Minter supports criminal background checks for all gun sales and a ban on assault-style weapons.”

Expanding the law under Universal Background Check legislation will do NOTHING to stop criminals from getting firearms.

Sue Minter and the anti-gun media KNOW THIS.

It is simply the latest method to force all law-abiding Vermonters to REGISTER their firearms with the federal government.

Sue Minter and the anti-gun lobby are again using scare tactics to single-out Vermonters that already own the most common firearm in Vermont, the semi-automatic firearm.

One pull. One bullet.

This type of mechanical action has been in existence for over 100 years and is the MOST POPULAR firearm purchased today.

“Assault Weapons” became the rallying cry of the elite to enact control over the general public in the 1990s and is still used today.

I guess, “Shall not be infringed” has a different meaning if you only take away a piece of the citizenry’s rights at a time…

VN: “Her stance is backed by a majority of Vermonters, but gun supporters and the gun lobby have thwarted their wishes.”

I am proud that I am part of those “gun supporters” in Vermont.

These “gun supporters” are some of the finest people I have ever met; they teach their children responsibility, they steward the environment, they love their families and fight for their rights against the wealthy elite and the biased media.

We all work without pay, unlike the anti-gun groups with their paid staff and politicians with anonymous donors.

I have been debunking the anti-gun rhetoric for the last 3 years and I’m not done yet.

Her stance is a LIE perpetrated by the Castleton Polling Institute and Vermont Public Radio.

To learn how the poll was rigged, go here:

A candidate who stands up in public and tells the world that is ready as soon as elected to VIOLATE HER OATH OF OFFICE to protect the Constitutional Rights of Vermonters is to be applauded?

This is how corrupt politicians maintain control over “We the People.”

This is truly disgusting and has reached epidemic proportions in our little state.

The editors of the Valley News and other anti-gun newspapers should be reviled by trying to gin up ratings by putting Vermonters’ Rights at risk.

It is a FACT that they deny.

Vermonters should remember on November 8th, that only the team of Phil Scott, Randy Brock, and Deb Bucknam will PROTECT their Constitutional Rights in Vermont!

To find out where ALL the candidates stand on your gun rights, visit: Gun Owners of Vermont Candidate Report

Do your part, VOTE!
If you don’t vote, don’t complain.