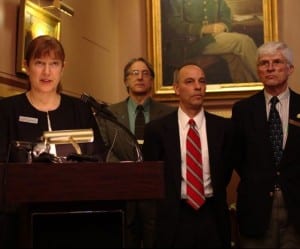 The latest casualty in the gun control battle is a bill that sought to strike a balance between gun rights and public safety concerns about unfettered access to weapons in Vermont.

The legislation, H.124, would tighten background checks for gun purchasers, limit ammunition magazines to 10 rounds, and give local police the authority to enforce the federal law prohibiting felons and domestic violence offenders from possessing guns. It does not limit the sale of assault-style weapons like those used to kill 20 young children in Newtown, Conn., last December.

Rep. Bill Lippert, D-Hinesburg, chair of House Judiciary, said his committee doesn’t have time to take testimony on H.124 before the crossover deadline on Friday, when all non-money related bills must be passed out of the House for consideration in the Senate. That means the bill will go nowhere this year, and it will not get a public airing at the Statehouse this session.

Rep. Linda Waite-Simpson, D-Essex and the key sponsor of the bill, said there isn’t enough support among House members to bring the legislation to the floor.

“I find it very disappointing,” Waite-Simpson said. “I think there are very good things in the bill that are not controversial.”

Most Vermonters, for example, support background checks for gun purchasers, she said. In a recent poll from Castleton Polling Institute, more than 80 percent of the respondents (half of whom own guns) supported universal background checks.

H.124 would restrict the manufacture, distribution and purchase of ammunition magazines with more than 10 rounds; close the gun show loophole, which enables people to buy guns without a background check; give local law enforcement the authority to enforce federal gun restrictions; require the
Department of Mental Health to report to the National Instant Criminal Background Check System; mandate a gun safety course for individuals carrying concealed firearms; and repeal the prohibition on gun silencers in the state of Vermont.

Her colleagues, Waite-Simpson said, compare the political repercussions of passage of any gun legislation to the controversial civil unions bill that gave gay couples the right to the same legal protections as married couples. Shortly after that controversial bill was passed in 1999, Democrats lost the House and Senate to Republicans. Many of the same “Take Back Vermont” activists from that era vocally oppose any gun restrictions, Waite-Simpson said.

“It’s unbelievable we can’t look at these things,” she said. “The Take Back Vermont folks are loud and vocal on this issue, and that’s reason enough in everyone’s mind that it’s a source of concern.”

And then there is the National Rifle Association intimidation factor. Vermont is one of five states with the least-restrictive gun laws in the nation, and
Evan Hughes, spokesman for the Vermont Federation of Sportsmen’s Clubs, a local group affiliated with the NRA, has said his members want to keep
it that way.  Lawmakers in Vermont like Waite-Simpson, who have been outspoken about the need for reforms, have been targeted by the NRA.

That fact has not deterred her from standing up for what she says are common sense restrictions. She is bringing representatives from Mayors Against Illegal Guns and Million Moms Against Gun Violence to the Statehouse on Wednesday for a press event.

“Who better than mothers to stand up to the NRA?” Waite-Simpson said. “We are raising our children to solve problems with words, not guns. This is what million moms are about — changing our culture. That’s where I’m standing, and I may get knocked down.”

Waite-Simpson said it’s shocking that in the three months after the Sandy Hook Elementary School killings, “We can’t even talk about it in this building.”

Rep. Allison Clark, D-Woodstock, who has sponsored a gun safety bill that would require gun owners to lock up weapons, said her proposal is is also getting a cool reception from lawmakers. Similar measures have passed around the country. She is perplexed by her colleagues’ non-response in the wake of the Newtown murders.

“This is a public health issue,” Clark said. “It’s not like plowing new ground. If we do nothing, fear wins, and I am tired of being dictated by fear.”
House Speaker Shap Smith says there is no consensus in the House on how to proceed with gun restrictions, if at all. The ground work hasn’t been laid for reaching consensus, he said, on a bill that could “go all the way through and be signed into law.”

He said lawmakers need to define “the problem we’re trying to fix first.”

“We’ve been giving a lot of thought about how we might create that consensus, and my ultimate goal isn’t to just pass something as a statement, it’s to try to make Vermont a safer place while maintaining our traditional rights for sportsmen,” Smith said. “I think that’s going to take a lot of work and finesse.”

“I talked to a bunch of gun advocates who are saying, ‘how can it be that all this legislation is being introduced’? I said, well, that’s democracy,” Smith said. “We don’t prevent people from introducing legislation. If we start going down that road, I’d be scared about my guns. If you start telling people what they can do as far as democracy goes, the next step is going to be is telling people about what they can and cannot have under hte Constitution. The question to my mind is do we want to have a hearing or do we want to get something done. And testimony on a bill is all well and good, but I think that this is going to be a process that takes some time and I think we’ve got to get the right people to look at the issue and work together to make some proposals that are going to have some consensus around them.”

On Wednesday, advocates for gun safety will hold a 10 a.m. rally followed by a press conference at the Statehouse on the eve of the three month anniversary of the Sandy Ridge Elementary School shooting. Former Gov. Madeleine Kunin and representatives from Mayors Against Illegal Guns and Million Moms Against Gun Violence will speak in support of H.124 and a bill that requires safe storage of guns