As Georgia and other states push to expand gun freedom, Vermont gun owners are claiming bragging rights as living in the nation’s original “guns everywhere” state — a distinction they link with the state’s ultra-low crime rate.

“We must be doing something right, because these other states are trying to make their gun laws closer and closer to ours,” said Bill Moore, a policy analyst at the Vermont Traditions Coalition. 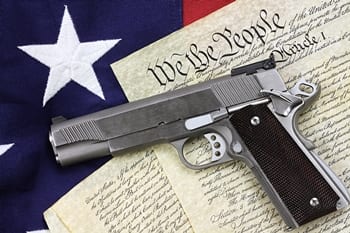 WE’RE NO. 1: Vermonters are proud they have the most ‘guns everywhere.’

Moore is one of many Vermonters speaking out after lawmakers in Georgia passed a bill this week that some have called the most expansive pro-gun law in the nation. The bill allows gun owners to carry guns in restaurants, bars, churches, schools and airports throughout the Peach State. It’s awaiting the governor’s decision.

“Guns in churches are permissible, and guns in establishments with a liquor license are also allowed … and Vermont has never required a gun permit,” said Evan Hughes, vice president of the Vermont Federation of Sportsmen’s Clubs.

“We have one of the highest percentages of licensed hunters in the lower 48 states. Gun ownership is very prevalent in Vermont, and we don’t have a problem with guns being involved in crime or firearms accidents. So the laws serve us well,” he said.

Other indicators of Vermont’s leadership among pro-gun states include Article 16 of the state Constitution, which reads, “The people have a right to bear arms for the defense of themselves and the state.” The law dates back to 1777 and was strengthened in 1903 by State v. Rosenthal.

Paul M. Barrett, senior writer for Bloomberg Businessweek, claims the new race to the top among gun-freedom states is a reaction to calls for gun control in the wake of the Sandy Hook school massacre in Connecticut. Gun control advocates find this trend disturbing.

Vermont gun owners such as Ed Cutler, president of Gun Owners of Vermont, take issue with such statements, saying the Green Mountain State is the nation’s reigning “guns everywhere” state — and it’s not a partisan issue.

“As funny as it sounds, being the most liberal state in the union, we also have the highest per capita gun ownership. Near as anybody can tell, 70 to 75 percent of all households in Vermont have firearms,” Cutler said. “Up here, even the liberals have guns.”

Another measure of Second Amendment freedom relates to how gun owners may carry in states. Just four states — Vermont, Arizona, Wyoming and Alaska — allow the concealed carry of handguns without a permit.

Moore said those rules have always been left up to the people of Vermont.

“The Supreme Court in the state of Vermont has said that the way you carry a weapon, weather concealed or not concealed, is irrelevant. What’s relevant is your intent to commit a violent or felony act,” he said.

And while Vermont has no law prohibiting guns on college campuses, private and public universities are free to set administrative restrictions.

“You’re going to hear, ‘Oh my god, we’re going to have the OK Corral,’ and all these predictions of gloom and doom. It never comes to pass.”

“Vermont continuously ranks among the lowest crime states in the country. In Massachusetts, Rhode Island and Connecticut, they have much more restrictive gun laws, yet they have higher crime rates. So you have multiple states right there adjacent to each other, and we disprove the idea that gun control works at preventing gun crime.”

By Bruce Parker | For Vermont Watchdog