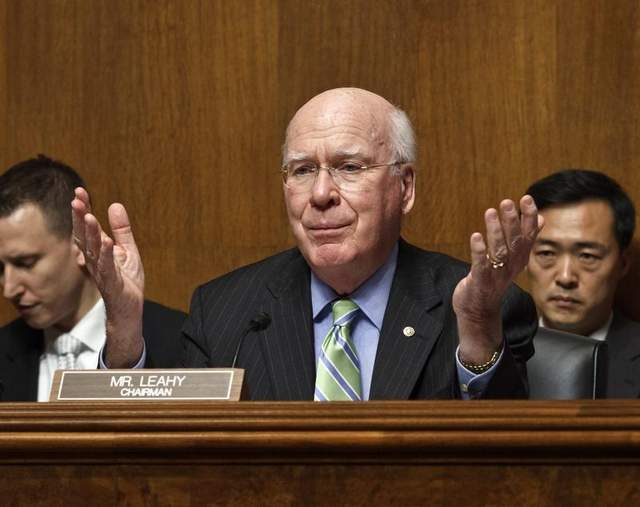 WASHINGTON — As chairman of the Senate Judiciary Committee and the Senate’s most senior member, Patrick Leahy of Vermont has a powerful role in advancing the Obama administration’s gun-control agenda.

But he may have a dilemma.

If he helps President Barack Obama and some Democratic colleagues achieve their goals, he risks angering constituents in gun-friendly Vermont.

“The majority of the people in the rural areas, I know they don’t want any new legislation,” said Richard Craig, president of the Lamoille Valley Fish and Game Club. “I’m sure if he goes down that road, he will hear from Vermonters.”

Randy Lopes, president of the Green Mountain Practical Shooters club said, “I think that he needs to remember that he’s not there to help the president.

He’s there to do what the people in his state want.”

On Wednesday, Leahy will hold the first congressional hearing on gun violence since last month’s shootings in Newtown, Conn.

The committee will hear from witnesses from across the issue’s spectrum, from the National Rifle Association to retired Navy Capt. Mark Kelly, whose wife former Rep. Gabrielle Giffords was injured during the January 2011 shootings in Tuscon, Ariz., that killed six people.

Leahy says he wants to examine how to protect people from gun crimes while respecting the “fundamental right to bear arms.”

“The fact that we cannot do everything that could help should not paralyze us from doing anything that can help,” Leahy said during a speech this month at his alma mater, Georgetown University Law Center.

For Leahy, deciding whether to support a full package of gun proposals — something Vermonters might see as infringing on their right to own weapons — will be tough, said state Sen. Richard Sears, D-Bennington, chairman of Vermont’s Senate Judiciary Committee.

“I’m sure that will be a difficult decision,” said Sears. “He’s going to weigh the views of his constituents.”

Leahy has said he supports stricter background checks for purchasing weapons. He supported the 1994 ban on assault weapons and high-capacity magazines that expired in 2004 and says he would support such measures again. And he introduced legislation on Tuesday targeting the practice of straw purchasing and illegal trafficking in firearms.

In his Georgetown speech and interviews, Leahy has referenced Vermont’s gun laws, ranked among the weakest in the nation. One law prohibits no more than six rounds in a semiautomatic weapon during deer season, he said.

“Are we really, as a nation, saying we’re going to be more protective of the deer than we are of our children? I think not,” he has said.

That quote is making some Vermont gun owners nervous.

“It doesn’t seem like that is a fair comment because nobody I know or nobody I would ever support would ever buy a firearm to use toward people,” said Bob Boivin, board chairman of the Lamoille Valley Fish and Game Club Inc.

Lopes said, “As far as I know, it is legal to shoot deer and illegal to shoot people. You’re not talking apples to apples there.”

Vermont gun owners don’t want any new legislation. They say authorities should enforce the laws that are already there.

Those sentiments became apparent when state Sen. Philip Baruth introduced a bill to ban the future acquisition of semi-automatic weapons. He ended up withdrawing the bill this month due to the opposition.

“When Vermonters saw that bill, they were pretty shocked,” said Evan Hughes, a vice president of the Vermont Federation of Sportsmen’s Clubs. “At the Statehouse they got quite a few phone calls.”

Sears, who had planned a hearing on the bill, said he received emails from constituents reminding him of 16th Article of Vermont’s Constitution, protecting the right to bear arms.

“They feel that’s a constitutional right,” he said. “The concern is that it becomes a slippery slope and what’s next?”

Burlington’s City Council passed a ban on assault rifles and high-capacity magazines, but that measure still has a long way to go and would have to be approved by the state Legislature.

Scott Chapman of Burlington, a former president of Green Mountain Practical Shooters, spent $2,000 on a booth at the Yankee Sportsman’s Classic outdoors show this month, specifically to encourage a letter-writing campaign to members of the Vermont congressional delegation. His efforts resulted in about 1,700 letters opposing new gun control measures that he will send to the delegation, he said.

Some of those who wrote letters believe in gun rights for self-protection. Others don’t want the federal government “monkeying around” with their constitutional rights, he said.

“I think (Leahy) should see where the feelings of his constituents are,” he said. “We do not support these types of firearms regulations in Vermont or in the country.”

Lopes, of the Green Mountain Practical Shooters club, said he’s already made his opinions known to one of Leahy’s aides. He said lawmakers are missing the point by focusing on guns.

“It’s the people,” he said. “You’ve got to solve the social issue.”

A champion marksman in college, Leahy owns a “sizable” collection of long guns and handguns of several different calibers, according to his staff. He has a makeshift pistol range in his back yard.

Leahy gets a C rating

Even so, Leahy’s record on gun legislation is mixed. The NRA gives him a C rating.

Along with the assault weapons ban, he has supported requiring background checks at gun shows and allowing lawsuits against firearms manufacturers. And he helped beat the NRA with a vote in 2009 against a measure that would have required states to recognize permits issued by another state authorizing the concealed carrying of a firearm.

On the other hand, he introduced legislation in 2010 to protect gun owners in bankruptcy proceedings. He has also voted to allow guns in national parks and on Amtrak trains. And he voted in favor of prohibiting U.S. foreign aid to international organizations that tax or require registration of U.S. citizens’ guns.

“He’s been good to us sometimes and good to them sometimes,” said Joshua Horwitz, executive director of the Coalition to Stop Gun Violence.

Asked why he hasn’t pursued gun control legislation in recent years, Leahy said his focus has been on patent reform and passing the Violence Against Women Act. His is the “busiest committee on the Hill” and “there’s only so many things you’ve got time to do,” he said. Focusing on gun control also would have required backing from the Obama administration.

“I don’t recall during the past four years any suggestion from the administration that we do something like this, can you?” he asked. “I also did not bring up any investigation into the assassination of John F. Kennedy or the sinking of the Titanic, either. I’m happy to work 75 hours a week but I want to get something accomplished during that time.”

As he turns to gun control in this Congress, Vermont gun owners say they want him to be deliberate in anything he does.

“We’re not going to do anything about deterring crime if we just pass something,” said Hughes. “We’re going to have to invest some time in this. I think the public has a right to have laws based on sound public policy.”

Some gun advocates say Leahy could face a tough re-election in 2016 if he doesn’t tread carefully on this issue. They cite the fate of former Republican Rep. Peter Smith when asked about their political power as a constituency.

Smith cosponsored a bill banning semiautomatic rifles in 1989, prompting an aggressive campaign against him in the 1990 election by the NRA and local affiliates. He was unseated and the election went to Independent Bernie Sanders.

Smith, now a senior vice president for Kaplan Higher Education Corporation living in Sante Fe, recalled the NRA’s attacks as “a hell of a squeeze play.”

But he thinks Vermonters today wouldn’t have a problem with stricter background checks and “reasonable” restraints on weapons.

Plus, his situation then was different from Leahy’s now, he said. He was a freshman congressman at the time without much political capital whereas Leahy has represented the state for 38 years.

“He knows the game and he is an incredibly effective legislator,” Smith said. “He’s hugely important to the state of Vermont in terms of his seniority and the role he plays in the Senate.”

Sears said Leahy has Vermonters’ trust, which is something Smith had not yet gained at that point in his career.

“He’ll get some flak in some quarters,” Sears said. “By and large, Vermonters have grown to trust and respect Pat Leahy. He knows that he’s going to have to have some conversations with Vermonters and he’ll make sure they understand why he does whatever he does.”