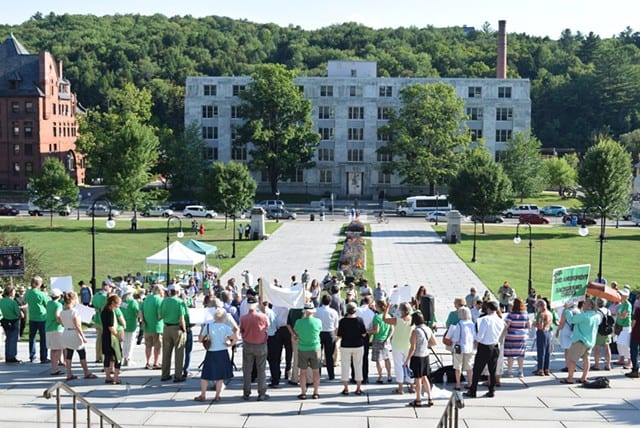 The gun control rally at the Vermont State House late this afternoon had lots of free publicity and as WCAX reported, turned out about 100 people.  Politicians and gun control group activists were the entire crowd.

Below is a photo by Reporter Terri Hallenbeck of the leftist political publication Seven Days, posted the photo below in her article  “Democratic Candidates Call for Vermont Gun Legislation”  Those with the back to the camera were Democratic Party politicians and gun control leadership.  Those facing the camera were the supporters.  This is clearly a dismal turnout on an extremely nice summer late afternoon.  This is the 89{c78b7ea562d14aa1f08e4d48fa5838cee7e11fea7bb763f970182b84d63034ca} of Vermonters who support gun control?

This was a partisan political event in an election year campaign.   And most Vermont media will embrace it.  Want to prove those who publish accounts of the demise of gun ownership in Vermont wrong?  Vote Tuesday!