Welcome back to this week’s edition of the GoVT Updates and what a busy week it’s been already.

For those who don’t remember, we started this session with two separate gun bills in play that carried over from last year and one of those bills is already seeing some action.  A complete list of all proposed legislation regarding guns is available on our website here.

The House Judiciary Committee took up S.30 on Wednesday and Thursday this past week and the bill has already had several additions.  What started out as a bill that criminalized the carrying of firearms in hospitals, government buildings, and childcare facilities (all having very loose definitions so they might be widely applied), was fought mightily by GoVT, VTC and VTFSC during last year’s Senate hearings.  A watered-down version of the bill banning firearms in hospitals only, eventually, narrowly passed the Senate Judiciary but passed the Senate Floor by a wide margin and currently looks poised to repeat the process in the House.

Before the House committee began discussion on Thursday, a “strike-all” amendment was proposed by Rep. Will Notte (D) Rutland which made several additions to the bill, most notably, the addition of language amending the NCIS background check process to close the “Charleston Loophole” –a long time staple in the wish list of groups like Gun Sense- even though it is now referred to as the “default proceed loophole” as the term “Charleston Loophole” has been largely debunked, in part due to the work of groups like GoVT.  A copy of the revised bill with the strike-all amendment can be viewed here.  Previous GoVT testimony debunking the Charleston Loophole myth can be viewed here.

By all accounts, this bill appears poised to pass in some form regardless of any objections to the contrary.  You can view our initial written testimony submitted on 1/13, and we are on the agenda for a follow-up this Thursday at 9:00 am, where I might hopefully better articulate the ethics of denying people the right of self-defense in any given location.  But even so, the legislature in this state, and specifically this committee have been historically resistant to reason, especially when it upends the narrative that disarming everyone will make us safer.  Regardless, we’ll do what we can.

The fact is that in an era of buzzwords and blind loyalties to partisan narratives, the public opinion in a state like Vermont is going to favor a bill that bans guns in hospitals.  Most people just don’t care to think about it any further than: “why do you need a gun in a hospital?”  If you’re reading this, and you’re a GoVT supporter, you probably understand that it’s not quite that simple.  To get a broader view of the issue, you can view the testimony we gave last year to the Senate committee where I highlighted the difference between the people who carry a gun for self-defense and those who carry as an act of aggression.

A couple quick and obvious points are that mass shootings overwhelmingly occur in gun-free zones as killers know there will be no resistance.  When you make it a crime to carry, the people who carry concealed as a precaution will largely go unarmed as they do not want to break the law. This ensures that unless the hospital employs private security, or there happens to be a random police officer there, any sort of meaningful mechanism of defense against a person intent on committing harm will be absent when needed the most.  Indeed, there is overwhelming evidence that gun free zones are dangerous and should not be expanded under any circumstances, but good luck convincing Phil Baruth and company of that.

There is also a bit of a sticking point, it seems, about the idea that someone might go openly armed into the hospital looking to make trouble without drawing their weapon, but by making some sort of scene by projecting the implication that no one might confront them because they are carrying a gun.  And there is a certain amount of legitimacy to this concern on the part of hospital patrons and staff alike about someone acting in a menacing manner.

To respond specifically to this point, one might point out that the vast majority of gun owners realize that -while one might technically have a right to do so- it’s generally not socially acceptable to go to your yearly physical with an AK-47 slung over your shoulder, and that even if, for some crazy reason, some antagonist-type individual felt compelled to push the issue, there will be consequences.  VSA 3705 (Vermont’s No-Trespassing law) specifically provides a mechanism with which to remove troublemakers in this sort of scenario without creating a separate crime specifically for the gun.

The argument that it’s necessary to ban the carrying of firearms in any one place or another is an incremental tactic used by gun control groups to chip away at the right to keep and bear arms.  The long game is to ensure that if the peasants insist on having an individual right to own a gun, that the list of places that right exists be narrowed as much as possible.  Just look at the bills introduced every year that would mandate keeping guns and ammo locked up separately in one’s own home and thus useless for personal protection.

It’s true that until we find a way to elect more pro-gun candidates to House and Senate seats that we will continue to face an uphill battle in preserving gun rights in the State of Vermont.  But, with your help we will continue to fight the good fight.  Consider running for office in your district this year or support the pro-gun candidates in your area if you can’t commit to a run yourself.  Together we can turn the tide. 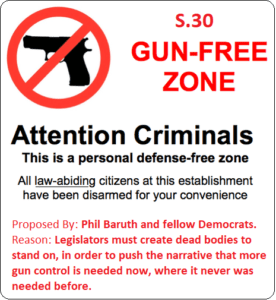