Hi all, Eric here a day late with your weekly GoVT update.

Not a crazy week under the virtual golden dome but not exactly slow either.  House Judiciary committee took testimony on bill H.133 on Wednesday Feb 3.  H.133 is a chunk of the infamous H.610 from last year and deals with seizure of firearms from individuals subject to relief from abuse orders.

The stated purpose of H.133 is to “codify existing law” [to which the committee and witnesses say means “clarify” an existing law, but according to Princeton University means “To turn (a common law requirement or practice) into law.”] in which a judge may order the relinquishment of firearms from persons subject to an RFA.  It is currently the courts position that they already have this power under 15 VSA 1103 (c)(1) which states: “The court shall make such orders as it deems necessary to protect the plaintiff, of the children, or both, if the court finds that the defendant has abused the plaintiff.”  Even though this section does not specifically reference firearms, the state is of the opinion that this wording gives them the power to take guns from the accused on the basis of a temporary RFA, issued without the knowledge of the defendant, and based on a preponderance of evidence (more on preponderance later.)  H.133 seeks to specifically spell out that power in law.

At first glance, this seems fairly straightforward, but the more we dig, the more questions we come up with.  GoVT did not get a chance to testify Wednesday, however we are on the agenda for tomorrow (Tuesday Feb 9th) at 1:00.  Because this thing has a lot of moving parts, and the legal explanations are quite lengthy, I’ll save the in-depth analysis for later in a separate (much longer) piece for those who want to get into the intricacies.  In the meantime, the bill as introduced can be viewed here: https://legislature.vermont.gov/bill/status/2022/H.133 and the video of the committee hearing can be viewed here: https://www.youtube.com/watch?v=2pLWD4ZRETk&t=6227s  All committee hearings are streamed live on their You Tube channel and can be viewed at any time.

Senate Judiciary took testimony again on Wednesday regarding S.30 (prohibiting the carrying of a firearm in certain public places.)  The committee heard from the commissioner of the Department of Children and Families and discussed the bill afterward.  The video is available here and we highly recommend watching: https://www.youtube.com/watch?v=GYsHeyVv_3U  I’m sure by now that most folks have seen our report of Senator Baruth’s disparaging comments about military and law enforcement officers carrying firearms and the Senator’s exchange with the witness in this video and his ensuing discussion with committee members, gave some interesting insights as well.  We will be releasing more of the Senator’s best sound bites over the next couple weeks, and hoo-boy, there are some good ones.  Stay tuned.

Meanwhile, committee chair, Senator Dick Sears has stated that they will take a two week break from S.30 and look at it again afterwards.

As always, I like to remind everyone that you can help out tremendously by becoming an official member of GoVT here: Join GoVT now/  We’re gonna keep hustling for you guys but any little way you can get involved helps.  Become a member, email your reps, talk to your neighbors, and make sure your friends and family are registered to vote.  We don’t have the big bank accounts like the NRA, but we have an active and engaging membership, which is worth more than money can buy.

With your grassroots support, we can beat the big-money anti-gunners and flip the script on a legislature that has grown way too comfortable with their bullying of the Vermont gun culture.

We appreciate you guys and stay tuned for regular updates, info, and analysis. 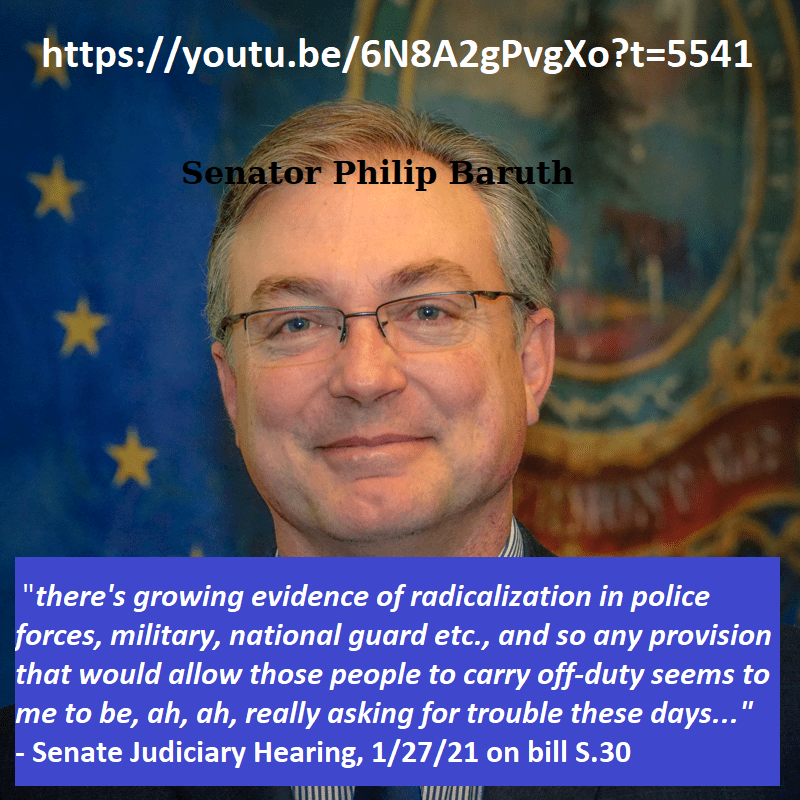